The stock market continued its climb in the first quarter of 2017, with the S&P 500 rising just over 5 percent. We view this more as a political rally than an economic one. The Trump Administration’s pro-market agenda helped push stock prices to higher than normal valuations, but it remains to be seen whether future profits justify the optimism. It’s mid-April and the S&P 500 is currently trading at a rich 29 times earnings, well above its average 16 multiple, according to the Shiller P/E, defined as price divided by the average of ten years of earnings (moving average), adjusted for inflation.

Investors are banking on the Administration’s political clout to deliver lower taxes, negotiate more favorable trade agreements, spur investment into crumbling infrastructure and provide relief from burdensome regulations. But clearing the hurdles of intraparty factionalism, let alone opposition from Democrats, has been more difficult than expected. Exhibit A is the Administration’s failure to repeal Obamacare.

On a macroeconomic level, worrisome signs abound. That the health of our economy is heavily tied to the consumer is not news. In 2016, personal consumption accounted for 69 percent of U.S. GDP. That is why, to paraphrase a cliché, when the consumer sneezes, the economy catches pneumonia. Judging by several indicators, the consumer, if not sick, is simply tapped out. U.S. car sales, for example, fell short of expectations in March. While the decline was modest, it was the first time the auto industry sales have plateaued after about seven years of increasing sales. At the same time, the delinquency rate for subprime auto loans is at the highest level in at least seven years.

Credit card debt is also soaring. Collectively, Americans have racked up more than $1 trillion in debt as of February 2017, the highest level since January 2009 and up 6.2% from a year ago.

As consumer debt levels rise, interest rates are rising, too. The Fed hiked interest rates in December and in March and may raise them again in June. Moreover, some Fed members are suggesting that it’s time for the central bank to end its grand experiment in monetary policy and reduce its bond holdings. If so, the move will create a knock-on effect in the housing market. The Fed owns more than $175 billion in mortgage-backed securities, which account for a third of the market.  Any move to unload these securities will drive mortgage rates higher—a scenario that could keep the consumer in bed for a long time.

We also found job growth figures worrying. The U.S. added 98,000 jobs in March, far fewer than the 180,000 predicted. Given the number of store closings announced in the first quarter, we had been expecting a less than robust report. What did surprise us was the slowing growth rate of jobs in high-tech regions. This graph, courtesy of the online job site Indeed, gives an interesting perspective on the tech industry. 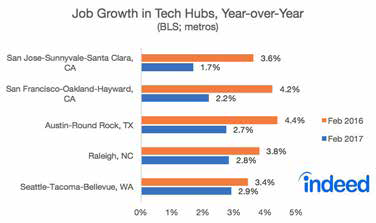 Finally, a lot has been written lately about the shift from active to passive investing. The amount of money that has piled into index funds is astounding, rising from around $11 million in 1975 to trillions today. At the risk of sounding self-serving, I feel that the risks of index funds need illuminating. As I have written before, public companies have been borrowing at record low interest rates to buy back their own shares. Buying back their own shares increases the price of the shares, which in turn increases their weight within the index. To remain properly weighted, index funds must buy more shares, which in turn, drives those prices ever higher creating, in my opinion, the possibility of a buy-back bubble. 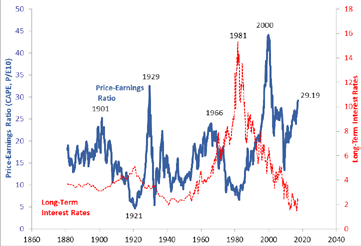