As I’ve pondered how the United States will get through the COVID-19 and Black Lives Matter crises, I’ve come to believe that resilience will be key to overcoming a devastating loss of lives and livelihoods.

Human beings can be incredibly resilient. Take the example of Theodore Roosevelt whose mother and wife died on the same day, when he was 25. Roosevelt wrote in his diary, “The light has gone out of my life.” He seemed to feel that his life was over and could not foresee a happy second marriage and a long public career, including his election to the U.S. presidency. Like Roosevelt, most of us have experienced some sort of life-changing crisis.

Roosevelt’s ability to recover may have been similar to the process author Jared Diamond notes in Upheaval: Turning Points for Nations in Crisis. Describing the survivors of a tragic fire, “… most of them, after an intensely painful several weeks in which they could not accept their loss, began a slow process of grieving, reappraising their values, rebuilding their lives, and discovering that not everything in their lives was ruined.”1 They displayed resilience.

Diamond also discusses the importance of “ego strength… [of] having a sense of yourself, having a sense of purpose, and accepting yourself for who you are.” Such a sense of self helps individuals to overcome crises and keep going despite failures. In my own experience, I once had to turn back just short of the top of Mount Whitney, failing in my attempt to scale the mountain within a day. But I learned from that experience, got stronger, and the next time, I succeeded.

Nations don’t have ego strength, but they do have shared national identities based on “features of language, culture, and history that make a nation unique,” notes Diamond. Those national identities influence how nations navigate crises. Our American identity contains many diverse threads, and it will be interesting to see how Americans pull through as a nation.

Resilience requires nations to acknowledge that they are in crisis, accept responsibility for doing something about the crisis, and pursue a common purpose. Surely, this is what COVID-19 and Black Lives Matter call for—and what is starting to be addressed by public policy. The two crises are entwined because the disease, the unemployment triggered by the coronavirus, and the recession that started in February2 disproportionately hurt people of color.

The pandemic has precipitated layoffs of a record number of people in a short period (see infographic). For example, in one four-week period, 22.03 million people—6.7% of the U.S. population—filed for unemployment, and the rate of unemployment peaked at 14.7% (see graph). The sheer numbers dwarfed the scale of peak initial jobless claims throughout U.S. history. 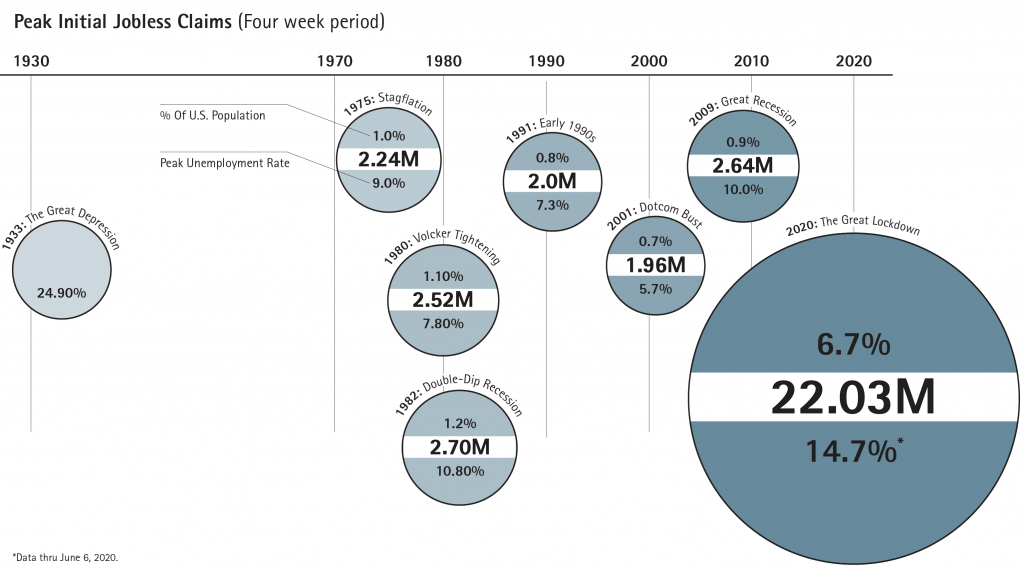 This situation calls for looking ahead. Some old ways of doing things won’t fully return. That’s similar to the fact that Theodore Roosevelt could not return to the life he knew prior to the death of his mother and first wife.

New opportunities will open up. That’s partly because “a crisis has a tendency to accelerate trends,” as Goldman Sachs Chairman and CEO David Solomon said in a recent interview.3 To me, it seems as if developments that would have ordinarily arrived in 2023, have been pulled forward to today. This will change business. Right now, someone is working on the next transformative company, and it will become a reality sooner because of changes accelerated by the current crisis.

Crisis brings risk as well as opportunity—a pairing encapsulated by the Chinese word for crisis, which combines the characters for “Danger” and “Opportunity.” The word “danger” also brings to mind Plato’s five regimes, a hierarchy of forms of government.

We are currently in the “democracy” stage, but without resilience and action, we could fall into “tyranny,” which is the next step if “democracy” fails. It’s possible that a strongman could capitalize on people’s fears to seize power.

For now, I’m encouraged by what I see. For one thing, we have a big advantage over the global financial crisis of 2007–2009, which was brought on by the banking system. This time, the banking system remains relatively sound, and the Federal Reserve has acted decisively to support it through a record-breaking amount of quantitative easing—purchasing financial assets to support their prices. Moreover, bankers seem to have learned that foreclosures are not the best way to limit losses. If the length and scope of this crisis is curbed, we may not experience foreclosures on the scale of the last U.S. recession.

Market movements associated with current events continue to spur adjustments to client portfolios. During the first quarter, I took advantage of opportunities to add to assets considered riskier, but which were available at relatively inexpensive valuations because they’d been hit hard. After these assets rallied significantly, I sold some of them to lock in gains and maintain resiliency in client portfolios.

During the past quarter, there was one particular stock that caught my eye and prompted me to purchase it. It’s a non-U.S. consumer staples company. It sells into emerging markets that I believe will eventually rebound nicely. Moreover, the valuations on the stock were very attractive when I compared them to the quality of the company’s earnings.

I will continue to strive to build resilience into client portfolios because I don’t want to exhaust my clients’ emotional capital. Your portfolio shouldn’t keep you awake at night.