Nothing could distract Americans from the drama of the U.S. presidential election during the 3rd Quarter of 2016—not an attempted coup in Turkey, not the slide in the British pound, and certainly not a generally placid U.S. stock market. With the exception of jitters over the fate of Deutsche Bank in the final week of the quarter, the markets displayed their typical summer doldrums. U.S. equities continued their momentum, with the S&P 500 index up 3.8% in the quarter and up 7.8% year-to-date. These favorable returns were supported by modest underlying earnings growth and a decision by the Fed—once again—not to raise interest rates.

We viewed the slow and steady markets in the third quarter as the calm before the storm. We had been positioning our portfolio defensively all year, and we are expecting more volatility as the election draws near, and afterwards. We don’t see either Hillary Clinton or Donald Trump as particularly bullish for equities. Clinton wants to raise taxes on the wealthy while Trump wants to eliminate the “death tax” altogether. She wants to expand the Affordable Care Act, while Trump vows to repeal it. She wants to cut oil consumption and push renewable energy, and Trump thinks coal should be an energy option. Only a third of voters say they trust Trump or Clinton, which suggests that there will be a lot of anxious Americans after November 8. And with fear comes volatility.

Stocks and bonds are already expensive by historic measures. Record low interest rates, courtesy of the Federal Reserve Bank and central banks in Europe and Japan, have sent investors on a worldwide search for higher yields, diverting investment into riskier assets like stocks, fueling the seven-year bull market. At the same time, investors fear that deflation could push interest rates even lower, which in turn, has created a huge demand for bonds that pay even lower rates.

In short, markets look precarious. We are beginning to see the negative effects of Brexit; the British pound has lost 14% of its value since the UK voted to leave the European Union in June. A year ago, sterling traded at $1.55; today it fetches around $1.21. Predictions call for its continued decline. As we observed in our 2nd Quarter commentary, an EU without Britain’s financial contribution dims the outlook for Portugal, Ireland, Greece and Spain—the PIGS economies, (PIIGS if you include Italy). If their interest rates spike, these countries could default on their debt and another recession could follow. If such a recession spreads to the U.S., we could see 0% rates on U.S. 10-year Treasuries.

To add to our concern, there’s been a steady rise in LIBOR— that’s the interest rate banks pay to borrow U.S. dollars for three months. Here’s a chart that I recently tweeted showing LIBOR’s ascent since March and Citi and JP Morgan’s LIBOR projections for year-end 2016. Beside it, a chart shows that the U.S. dollar index—a measure of the U.S. dollar’s value relative to a basket of six major international currencies—has also been climbing. The dollar has been rising in expectation that the Federal Reserve will raise rates before the end of 2016 (see figure 1 and 2). 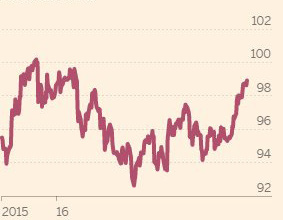 Why do we worry? A strong dollar makes our exports more expensive. The more we import goods, the more we create jobs for workers abroad. LIBOR, meanwhile, is more than the exchange rate between banks. It also guides banks in setting rates for adjustable-rate and interest-only mortgages and credit cards. A rising LIBOR can make all types of consumer and business loans more expensive which, in turn, could dampen consumer demand and slow economic growth. We are aware that new SEC rules aimed at safeguarding money market funds explain some of the recent rise in LIBOR. But as we know, reforms also have unintended consequences, and higher consumer and business borrowing rates could be one of them.

In 2008, the financial crisis taught us about black swans, perfect storms and “Minsky moments,” all of which refer to extraordinary events which, by definition, are unpredictable. We haven’t heard much about them lately. It’s hard to know where a black swan will appear, and we don’t spend too much time trying to predict the unknowable. At 7Summit Advisors, we are not so much forecasters as guardians of principle. To that end, we have added two positions that we think will advance our strategy.

Oaktree Capital Group, LLC (NYSE: OAK), based here in Los Angeles, is also a publicly-traded global investment management firm specializing in alternatives markets, with an impressive record in investing in distressed debt and real estate. It currently trades around $40 a share.

Finally, my family and I recently decided to sponsor and participate in the 7th Annual STOP CANCER 5|10K Run|Walk that was held Sunday, October 23 at Woodley Park in Van Nuys. Cancer touches us all. Proceeds from the event (which I will report on in the next commentary) support STOP CANCER’s mission of funding research and finding cures at UCLA’s Jonsson, USC Norris and City of Hope Comprehensive Cancer Centers. Thanks to all of you who contributed to our efforts.

And as always, thank you for the trust you have placed in me and in 7Summit Advisors. We work hard to earn that trust each day.