Will the Fed Raise Interest Rates?

In mid-December, the Federal Reserve signaled a decisive policy shift from stimulating the economy to fighting inflation. While the Fed’s current target for short-term interest rates is 0% to 0.25%, its policymaking committee foresees raising that target three times during 2022. At an extreme, three committee members now anticipate rates as high as 2.125% by the end of 2023.[1] The Fed also plans to taper, and then end, its bond-buying program prior to hiking interest rates.

Along with a strengthened labor market, this policy shift was spurred by pandemic-related inflation that has proved more persistent than Fed Chair Jerome Powell expected. The U.S. inflation rate hit an annual rate of 6.8% for the year ended November 30. That’s the highest inflation rate since 1982. You may have seen personal evidence of high inflation in the price of recently purchased products or services.

A Case for Leaving Rates Unchanged

Powell’s policy shift is in contrast to the positions of Europe and Japan. European Central Bank (ECB) President Christine Lagarde indicated that the ECB is unlikely to raise rates in 2022. Moreover, while the ECB is starting to phase out its bond-buying program, it is initiating other measures to support eurozone economies. Japan also is unlikely to raise rates in 2022. The Bank of Japan has held short term interest rates at or near zero for decades.[2] Among major developed-world nations, the U.K. is an outlier. The Bank of England raised rates from 0.1% to 0.25% on December 16.

This disparity among developed-nation interest rate policies is partly why I think that the Fed is unlikely to raise its target rate by much. Higher U.S. rates would make the U.S. more attractive to investors seeking yield. Foreign investors would convert their currency to U.S. dollars to buy U.S. bonds, driving up the price of the dollar. A more expensive U.S. dollar would, in turn, make U.S. goods and services more costly to foreigners, driving up the current U.S. account deficit. Such a development would likely be especially painful to large, U.S.-based multinationals that rely heavily on foreign sales.

Another constraint on U.S. rate hikes is the size of our national debt—a whopping $29 trillion. That’s bigger than the combined economies of China, Japan, Germany, the U.K., and India.[3] On top of that, the U.S. government is borrowing more than $1 trillion annually and paying over $900 million in interest per day.[4] If the Fed raises rates, we’ll end up paying higher interest on that huge debt, which doesn’t seem like a sensible move. 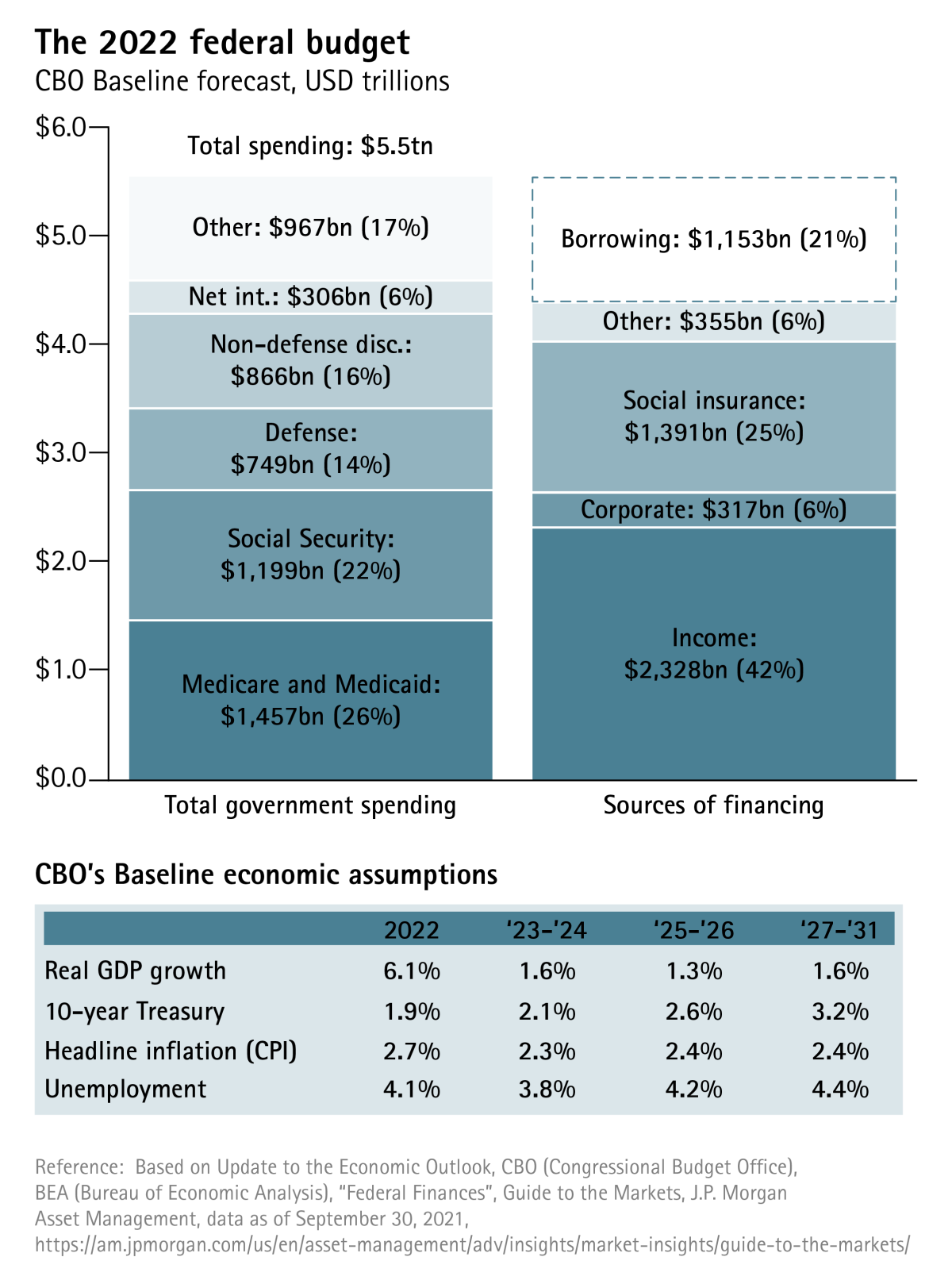 Where to invest if markets falter

A further influence on the future of U.S. rate hikes is the likelihood that investment markets won’t react well to big hikes.  Overall, I believe the Fed will maintain an “accommodative” stance.  In other words, it won’t raise rates dramatically. As long as inflation persists, this will create negative real interest rates. For example, if you can borrow at 3% and inflation is 7%, it’s as if you’re borrowing the money for free.

In Europe, which has experienced negative real and nominal interest rates for some time, the prices of real assets—such as real estate—have soared. This is why I’m looking at more investment opportunities in real estate and commodities.

As for other investment opportunities, I’m wary of the most expensive U.S. stocks as measured by price/earnings multiples. The top 10% of those U.S. stocks are selling at a price/earnings multiple of 29. That’s high. And if the U.S. experiences stagflation—a combination of inflation and weak economic growth—those multiples could fall, depressing the stocks’ prices. Stagflation appears possible with the ending of economic stimulus measures.

Chinese stocks have not performed well recently under the shadow of Chinese regulatory tightening and other developments. While this is of some concern, I’m sticking with Chinese stocks for the long run. China is simply too big a market to ignore, and it’s a source of incredible growth and innovation that we can’t necessarily find elsewhere. In some areas of technology, China has surpassed the U.S. and it’s rapidly gaining in areas where it’s not a leader.

In December, a major Chinese firm delisted from the New York Stock Exchange. More firms may follow, as China has become less dependent on U.S. capital. However, delisted companies are not inaccessible to U.S. shareholders. The stocks are likely to have the option to convert to Hong Kong-listed stocks that can be held in portfolios.

During the past quarter, I made few changes to client portfolios. However, I remain alert to opportunities to improve portfolios with attractively priced investments that offer a margin of safety. There are additional stocks and bonds that I will consider buying (or adding to positions) on pullbacks in their prices.