Know-it-alls and “I told you so” are so irritating. Nevertheless, at the risk of irritating you, I want to point out that last October— contrary to prevailing wisdom—I mused that the Federal Reserve would not raise interest rates.

There’s one worry I don’t share with Wall Street: the fear of an imminent hike in interest rates by the Fed because, as I wrote in October, its goal of full employment remains far off.

Okay, I was not completely correct. The Fed did raise rates, but only by ¼ of a percent in December 2015. It hasn’t raised them since, and between Brexit and mixed signals about the U.S. economy, I doubt the Fed will raise them this year.

Signs of softness in the U.S. economy remain, and our financial markets are reflecting this uncertainty. The Dow Jones Industrial Average and the S&P 500 posted gains in the second quarter, up 1.4% and 1.9%, respectively, and for first half of the year, up 2.9% and 2.7%, respectively. But the Nasdaq is down—off 0.6% for the last three months, and off 3.3% for 2016.

One worry is job growth. The strong rebound in June only brought hiring in the second quarter to an average 147,000 a month, a worrisome drop from the average 229,000 in 2015. Ultra-low interest rates here and negative rates in Japan and Europe reflect weak demand and a potentially deflationary environment. Until the Fed sees an economy humming along for at least another quarter, accompanied by a 2% increase in inflation, don’t expect any hikes in interest rates.

The chart below, courtesy of the Federal Reserve Bank of St. Louis, gives weight to my concern. Historically, according to its data, soon after temporary job employment peaks, a recession often follows. It remains to be seen if June was one of those peaks. 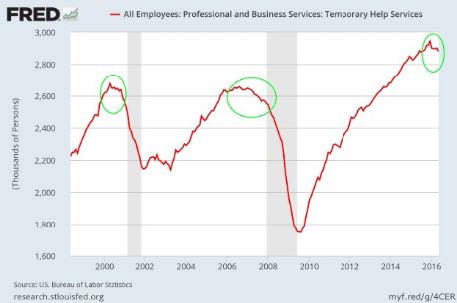 If Brexit goes through, other countries may vote to leave the European Union, which could lead to a Euro Zone banking crisis. Britain contributes about $18 billion a year to the EU pot, which is a big chunk of change for Germany and France to make up.

Without the UK’s contribution to the EU, the outlook for Portugal, Ireland, Greece and Spain, the PIGS economies, (PIIGS if you include Italy) looks shakier.  If they default on their debt, another recession could follow. If such a recession spreads to the U.S., we could see 0% rates on U.S. 10-year Treasuries.

Bottom line? We remain cautious about U.S. equities in general and enthusiastic about contrarian plays like energy. As you may recall, we started buying energy stocks in late 2015 and early 2016 at bargain prices, a strategy that has worked well. Plains All American Pipeline (NYSE: PAA), a publicly traded master limited partnership in the oil pipeline transportation, marketing, and storage business, was trading near its five-year low at the time of our purchase and is now trading around $28 a share. First Trust Energy Income and Growth Fund (NYSE: FEN), a closed-end equity mutual fund, also appreciated and now changes hands for about $25 a share.

We did sell our position in Petróleo Brasileiro S.A., better known as Petrobras (NYSE: PBR), to reduce volatility and because there are better places to allocate capital. We remain bullish on the price of oil for simple supply and demand reasons.

Finally, I’ve included a photo of me at the summit of Mt. Urus, part of the Andes mountain range in South America, which was taken in early July. At 17,800 feet, it is one of Peru’s highest peaks. I trained for the difficult climb by swimming and I am grateful to those who are sponsored me and my goal to raise money for cancer research. 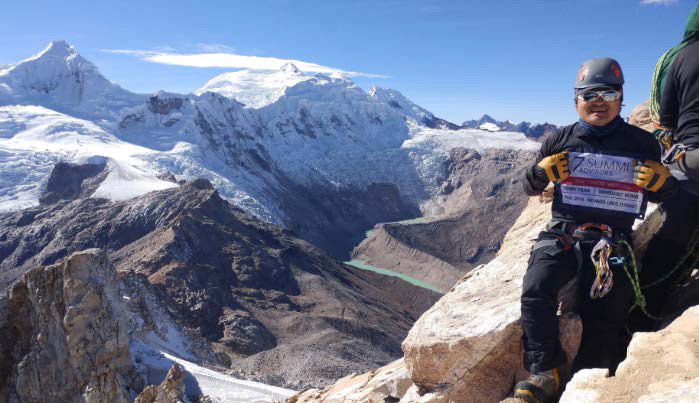