President Donald Trump has already delivered on his promise to shake things up. He has scrapped the Trans-Pacific Partnership trade agreement, frozen non-military hiring at the federal level and told U.S. CEOs to expect stiff tariffs unless they make their products in the U.S.

However worthy his bold “America First” message is, its implementation carries risks. As Shakespeare observed, “What’s past is prologue,” and when Trump talks tariffs, we are reminded of the disastrous effects of the 1930 Smoot-Hawley tariff.

Since then, trade has become vastly more complicated. Corporate America executed global supply chain management precisely so it could bypass unions and wage strikes. Moreover, it’s unlikely that tacking tariffs on goods made by foreign factory laborers who only make $400 per month in automated factories will stop foreign goods from flooding in.

We thought the lessons of protectionist measures had been learned and that there was no going back on the commitment to open trade. But Trump has threatened to pull out of the World Trade Organization if he can’t renegotiate terms.

Meanwhile, Fitch, the rating agency, recently warned that the U.S. is at risk of losing its top tier credit rating if Trump follows through with his plan to increase spending on infrastructure while cutting taxes by $6.2 trillion over the next ten years.

A more relatable economic trend we call the “Bugatti Indicator” was revealed a few weeks ago in Scottsdale, Az. Floyd Mayweather put his $3.5 million Bugatti up for auction at the Barrett-Jackson auto show, the largest in the country. But bidding only reached $1.9 million, falling short of his $2 million minimum.

These concerns have strengthened our commitment to a cautious and contrarian approach. During the 4th Quarter, we took advantage of the 3% decline in bonds, as measured by the Barclays Aggregate Bond Index. We added to fixed income and increased duration—a reflection of our thinking that the yield curve will flatten in anticipation of slower economic growth.

We know our position stands in contrast to the apparent reawakening of animal spirits and investor confidence following the surprising presidential election results. With Republicans controlling both Congress and the White House, their chances of passing a pro-growth agenda seems likely. But while stock prices have increased, earnings estimates for companies in the S&P 500 have been falling, as this chart for the 4th Quarter 2016 shows. 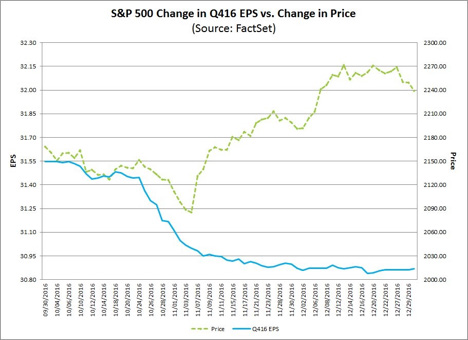 Finally, history tells us to expect crashes in the business cycle every seven to eight years. We think we are up against that time frame now. And as this chart shows, in recent years markets have rallied in anticipation of presidential inaugurations, but faded in the ensuing years of an administration.

We see yellow traffic lights ahead: Caution. Go slow. As always, thank you for the trust you have placed in me and in 7Summit Advisors. We work hard to earn that trust each day.