I’m always trying to anticipate upcoming changes so my clients can profit from them. That’s what brought me to physicist-futurist Michio Kaku’s book, The Future of Humanity: Our Destiny in the Universe, which we discussed in our third-quarter 2020 letter. I’m still exploring how the world might transition from its current state to what Kaku describes as the next step on the Kardashev scale of advanced civilizations: “A Type I civilization [that] utilizes all the energy of the sunlight that falls on that planet.”1 The importance of energy led me to Microsoft co-founder Bill Gates’ How to Avoid a Climate Disaster: The Solutions We Have and the Breakthroughs We Need. The books by Kaku and Gates complement one another.

Kaku has added a Type 0 to the Kardashev scale, saying in a video presentation2 , that the earth is currently at about a .7 on the progression away from reliance on “dead plants, oil and coal.” That means earth is “about 100 years from attaining Type I.” I’m looking to see what will get us to a Type I civilization.

The move away from oil will be driven partly by the reality of the Hubbert peak theory that petroleum production tends to follow a bell-shaped curve. The U.S., and perhaps the world, has passed the peak of oil production, which means that oil prices are going to rise. Meanwhile, says Kaku, solar prices are coming down. This, in turn, will spur the world’s move to alternative energy sources, including solar, but also energy from nuclear fission and fusion.

Gates suggests a three-part approach to this transition to alternative energy sources:3

Gates emphasizes the elimination of greenhouse gases. “To stop the warming and avoid the worst effects of climate change—and these effects will be very bad—human beings need to stop adding greenhouse gases to the atmosphere.” That requires eliminating the 51 billion tons of greenhouse gases that the world generates annually. That’s a tall order. However, Gates is optimistic on the outlook for green electricity—at least in the U.S. “Changing America’s entire electricity system to zero-carbon sources would raise average retail rates” by about 15% or an affordable “$18 a month for the average home,” he says.4 A similar move in Europe might raise rates by 20%.5 However, the rest of the world isn’t as fortunate in its access to sources of renewable energy, including wind, sun, and water for hydropower. So even if the world achieves Gates’ goal of deploying existing technologies, more will be needed.

The path to zero greenhouse gas emissions may involve nuclear energy, says Gates, because it has the advantages of being clean and—unlike sun and wind—always available. Still, the risk from nuclear accidents is a concern. Kaku calls nuclear power a “Faustian bargain”—a kind of “deal with the devil”— because no nuclear power plant can survive a 9.0 earthquake like the 2011 earthquake and related tsunami that caused the Fukushima Daiichi nuclear disaster in Japan.6

Eventually—perhaps around 2030 or 2040, according to Kaku7 —nuclear fusion will become practical. Nuclear fusion, in contrast to the nuclear fission that powers today’s nuclear plants, does not generate long-lived radioactive nuclear waste. That will make it a safer form of energy. That’s important because, as Gates says, we need to create an “energy system that is all the things we like (reliable, safe) and none of the things we don’t (dependent on fossil fuels).”8

If we can figure out how the world will overcome the challenges of eliminating greenhouse gases, we can invest to profit from those solutions. We currently strive to do this by investing in solar companies as well as traditional utilities that are shifting to use more renewable energy powered by wind or sun. We also look at companies that are building the infrastructure needed by renewable energy providers or that provide the raw materials used in the creation of that infrastructure. We take this indirect approach to investing in renewable energy because most emerging technology companies are not yet generating profits. Eventually, their time will come. As energy demand increases, renewable sources are increasingly being used to meet that demand (see graph).9 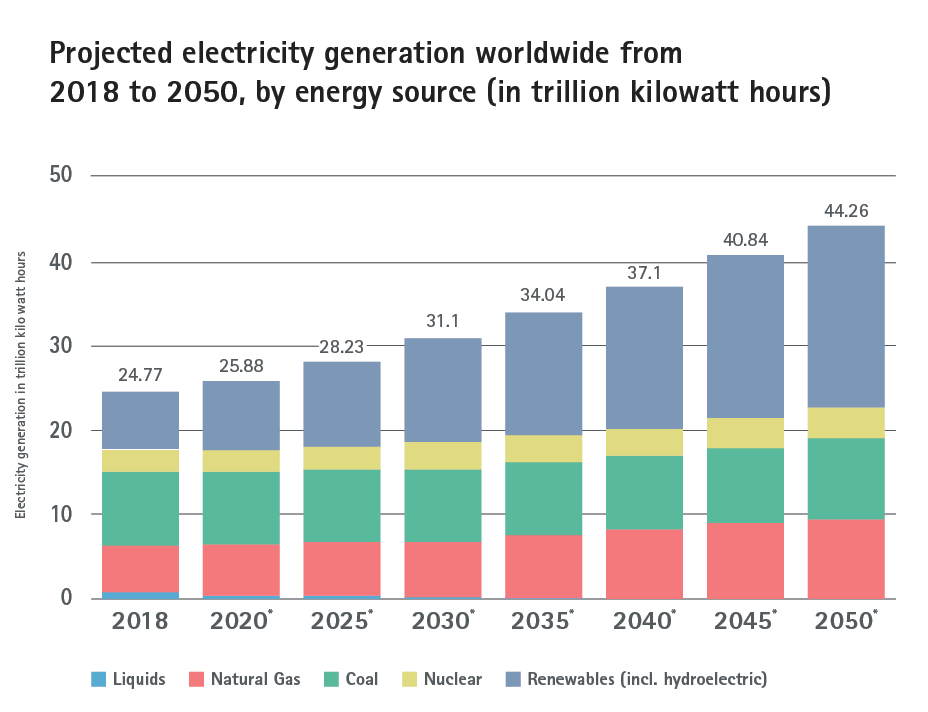 Renewable energy is just one of the themes in our investing. We continue to look at opportunities in emerging markets. We remain interested in the internet companies in the emerging markets, especially in China and Latin America. We made some buys in those areas on recent pullbacks in their share prices. Looking at sources of income, we sold most of our fixed-income investments that had risen significantly in price. We are uneasy about holding longer-term fixed income because of interest rate risk. Historically, longer interest rates tend to decline first during the middle of an economic recovery, so investors are not rewarded for taking the extra risk that comes with longer-term bonds. In this environment, we like some dividend-paying companies as a source of income.