Sir John Templeton, the late great global stock picker, famously remarked, “The four most dangerous words in investing are: ‘This time is different.’” A lot of investors think this time is different. As we write, the stock market is reaching new highs, turbo-charged by the tax overhaul and optimism about economic growth.

And yet Templeton’s words of caution came back to me recently, prompted by a savvy 7Summit Advisor client who wanted to know why anyone should care about flattening or inverted yield curves internationally. My client asked, “Besides China, why do yield curves in emerging markets matter?”

The answer I gave came from a lesson I took away from the 1997 Asia Financial Crisis—namely, that a global crisis can be triggered by events in small, obscure markets like Thailand and Indonesia. Yield curves show the slope of government bonds over various time frames. Under normal conditions, the yield curve slopes gently upward, reflecting that governments pay investors more to hold their 10-year notes than, say, two-year debt.

However, under abnormal conditions, the yield curve inverts—usually, because a country’s central bank has raised its short-term interest rates to rein-in inflation. In this upside-down scenario, investors get better rates holding 2-year paper than 10-year paper. Inverted yield curves often signal a recession is on its way because higher short-term rates can have a deleterious domino effect.

Imagine a Turkish carpet manufacturer who borrowed money in U.S. dollars to expand his business. As rates rise in the U.S., the Turkish Lira depreciates unless Turkey’s Central Bank raises interest rates in response. If the domestic currency depreciates, it takes more Lira to pay back the loan denominated in U.S. dollars.

That means the Turkish carpet manufacturer can’t repay his 13% loan, held by some levered hedge funds. In turn, these hedge funds that borrowed money from a bank in Japan or maybe Europe at zero percent can’t repay their bank loans. Cascading recessions take place across emerging markets. Nigeria can’t pay, and then Mexico can’t pay. Long Term Capital Management was brought down by a similar scenario in 1998.

Beginning in late 2016, the Fed began raising rates again. But for the first time in U.S. economic history, as the Fed is raising rates it’s also reducing $4.5 trillion in Treasuries and mortgages that it bought to stimulate the economy after the 2008 financial crisis. The accompanying chart illustrates the huge run off in the Fed’s assets scheduled over the next few years.

SHILLER PE RATIO
The S&P 500 has been trading at a rich 34.52 times earnings, well above its average
16 multiple, according to the Shiller P/E–defined as price divided by the average
of ten years of earnings (moving average), adjusted for inflation. Indeed, this is the
second most expensive market in U.S. history, ranking only behind 2000 when the
P/E was 43.2. Worth noting, just before Great Crash of 1929, the P/E was 32.6.
Source: GuruFocus.com 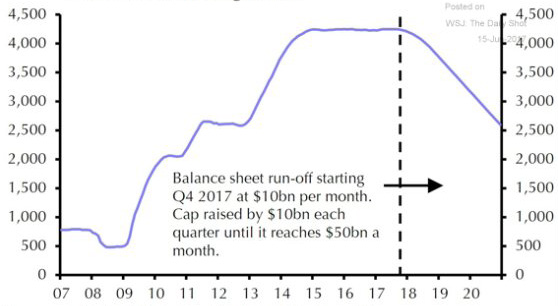 The combination of rising interest rates and an end to cheap money puts us in uncharted waters. Even more difficult to predict is how these actions could affect emerging market economies. I’m not saying history will repeat itself, but the reappearance of inverted yield curves in Turkey, Egypt, and Nigeria along with flattening in other emerging markets is one reason I don’t feel comfortable saying, “This time is different.”

It’s always worthwhile to gather opinions of eminent economists.  To that end, in early January we dispatched Sona Shahinian, our analyst-intern, to Newport Beach to hear Mohamed A. El-Erian speak at a sold-out event hosted by the German American Business Association, or GABA, in early January.

El-Erian is the chief economic adviser at Allianz, the corporate parent of PIMCO where he served as CEO and co-chief investment officer from 2007-2014. Sona gave us some highlights and we thought you would be interested in them, too.

El-Erian thinks 2018 will be an extrapolation of what happened—and did not happen—in 2017. Last year saw a synchronized pickup in global growth, led by the US, Germany, and China. Central banks in Europe continued to take a stimulative approach and tax reform spurred consumer consumption. He thinks those factors will be present in 2018.

Meanwhile, there were no major disruptions in trade (that were enforced), and the Fed did not make mistakes. (He thinks Fed Chair Janet Yellen will go down in history as a remarkable Fed Chair.)

On the international front, El-Erian said the answer to whether there would be a hard or soft Brexit turned out to be that it’s going to be a slow Brexit. Despite speaking at the GABA event, and knowing his view would be unpopular in Germany, El-Erian said it will be necessary to forgive Greece’s debt so that the European Union can move on.

Looking ahead, El-Erian said economists know less now about three factors than during his entire career: inflation (in the past, only rising inflation was the concern); productivity (because it can no longer be measured with the same level of certainty); and wage determination (why are unemployment rates falling but wages remaining stagnant?) He says technology, from artificial intelligence to Big Data to mobile phones, has played a big role in reordering past assumptions.

Finally, El-Erian’s prediction about the stock market hinged on the economy. “We’ve reached a T junction,” he said, with two very different outcomes: the economy will either break from the current low growth into higher growth, or into even lower growth. He’s optimistic that the higher growth scenario will prevail.