Former Secretary of State Henry Kissinger knows that we can learn a great deal from history. When asked about conflict in a region, he locates the roots of the conflict in the region’s history. That’s why I turned to Kissinger’s On China as the American trade struggle with China has dragged on.

In On China, Kissinger says that it seems as if the U.S. and China are playing two different board games. The Americans are playing chess, aiming for total victory. The Chinese are playing the game known as “Go,” in which players aim for relative advantage. Historically, this has meant that, as Kissinger writes, “Rarely did Chinese statesmen risk the outcome on a single all-or-nothing clash; elaborate multiyear maneuvers were closer to their style.“

In other words, the Chinese are playing a long game, informed by history. Having endured humiliation by the West in the Opium Wars of the mid-1800s and a bitter civil war during the first half of the twentieth century, the Chinese are now resisting attempts at bullying by a foreign power. They are also fighting to avoid a return to political instability that results from appearing to yield to a foreign power, especially if it involves concessions that undercut China’s economic strength. China’s top concern is to grow jobs to power its economy and satisfy its 1.4 billion citizens.

Playing an all-or-nothing game of chess weakens America’s negotiating position—and may lead to big concessions to China in an attempt to position President Trump for a 2020 election victory. On the other hand, America may continue to bluster forward. This could have negative consequences, too. History tells us that economic measures like tariffs can become a spark that ignites a war. That’s true as far back as the Peloponnesian War of the fifth century B.C., when Sparta went to war with Athens partly in response to the Megarian Decree that sought to economically isolate a Spartan ally. More recently, the U.S. Smoot-Hawley tariffs of 1930 fed the Great Depression and contributed to a climate that fueled the rise of leaders like Hitler.

Ongoing conflict raises risks for the global economy and markets. When a weak economy crimps corporate earnings, markets eventually feel the pain. That pain will spread, as investors found out during the 2007-2008 global financial crisis. One bank had to “mark to market“ assets with values that had cratered, causing more banks to follow suit.

Today, corporate balance sheets interlock in a broader web that has grown with the creation of global value chains (GVCs), where the people and other components of production are located around the world. It’s hard to know how corporate balance sheets are tied together and where repercussions will end when the global value chain is disrupted. As Hyun Song Shin, head of research for the Bank of International Settlements, points out in a research paper, “very long GVCs are viable only with very accommodative financing conditions.“ International friction can also disrupt GVCs, as Americans now realize with new tariffs on Chinese goods.

Moreover, it’s clear that the U.S. has less flexibility than 20 or even 10 years ago to respond to the next economic crisis. In 2009, the national debt was just under $10 trillion. This year, the U.S. national debt hit $22 trillion—more than an entire year of U.S. gross domestic product. As a result, the U.S. won’t be able to spend its way out of the next economic downturn. Instead, it will need to rely again on monetary policy. But current low interest rates mean that the Fed doesn’t have much room, even if it again uses quantitative easing to put downward pressure on interest rates.

We see opportunities in commodities, as the world population grows from 7.7 billion in 2019 toward 9.5 billion by 2050. More people will need to be fed and to have other basic needs met. Despite this, commodities are cheap when compared with the S&P 500 (see graph). This suggests that investors may be handsomely rewarded if they are patient enough to wait for commodity prices to rebound. 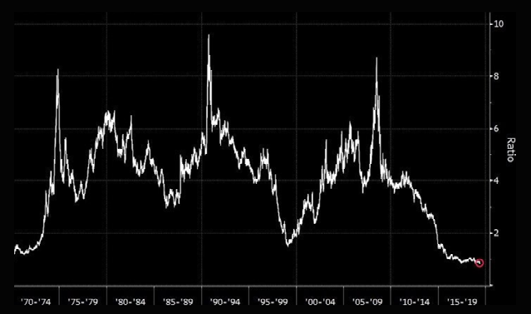 We are also attracted to companies that we believe will benefit from other long-term trends, like the increasing need for cybersecurity. A cybersecurity firm appealed to us when it was available at what looked like a reasonable price.

Given current global economic and political uncertainties, we are dialing back our portfolios’ market exposure by selling selected holdings. In addition to protecting gains, we are accumulating cash to invest when better opportunities arise.