For some time, I have been concerned about the possibility of a severe market decline—reflected in my positioning client portfolios to be less risky. Now a pandemic, which had seemed an unlikely scenario, has hit. And despite experts’ earlier warnings, we are poorly prepared to meet this challenge. As early as 1958, Nobel Prize winner Dr. Joshua Lederberg said, “The single biggest threat to man’s continued dominance on the planet is the virus.” Yet governments around the globe failed to adequately plan for a potential pandemic

To find a framework for understanding pandemics, I turned to Three Seconds Until Midnight. This 2019 book was written by Dr. Steven Hatfill, a physician and virologist; Robert J. Coullahan, president of Resource Readiness Group; and Dr. John J. Walsh, Jr., co-director of the Vanderbilt University Medical Center Program in Disaster Research and Training. These three highly qualified writers look at the problem of emerging viruses and use the 1918 influenza pandemic as a case study in epidemic disease. The authors also analyze how countries have responded—and should respond—to pandemics.

Discussing epidemic disease since the 1918 pandemic, the authors note that animal viruses are jumping more frequently to humans, which results in an increasing number of viral strain outbreaks (see graph below). For example, the H5N1 influenza known as “bird flu” killed humans as well as chickens. This trend suggested to the authors that, “In addition to Influenza, other types of animal RNA viruses will continue to emerge into human populations.” That’s what happened with Covid-19, the novel coronavirus. 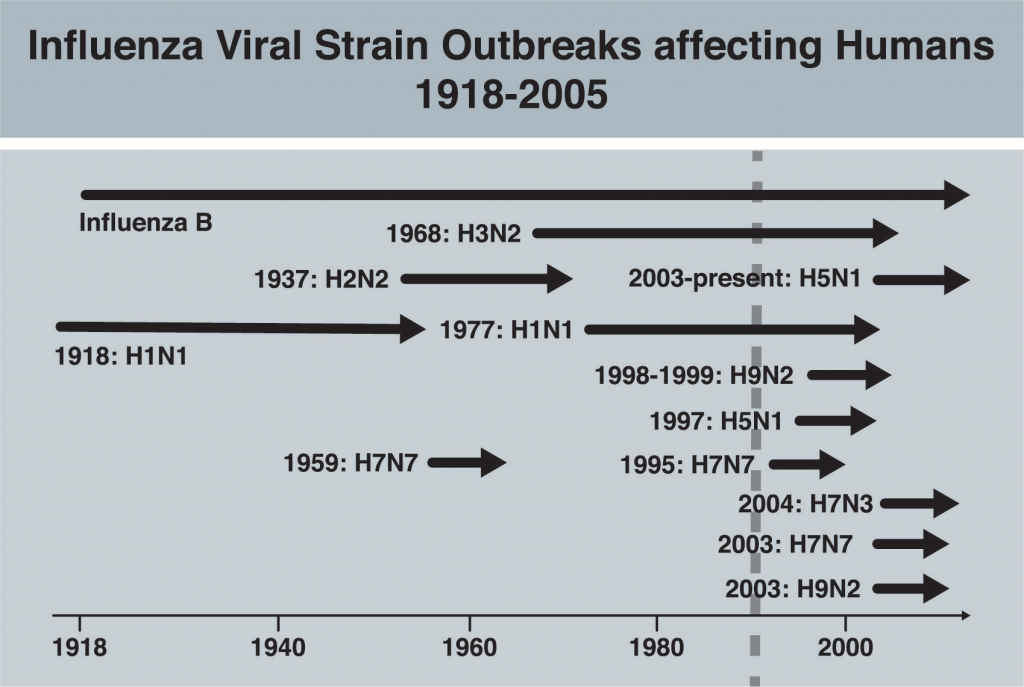 The 1918 flu pandemic progressed in three waves. This suggests that there may be additional waves of Covid-19 infections. However, the outlook could improve greatly once a vaccine or other treatments are developed in 12 to 18 months

In the meantime, China appears to be past the worst of the pandemic, reporting no new local infections as of March 18. The country is also reopening businesses, including American companies like Yum Brands (owner of KFC and other fast-food chains) and food giant Kraft Heinz. Yum Brands has reopened about 95% of its stores in China. As companies resume operations, this is likely to boost China’s economy and the performance of companies that rely on China as part of the supply chain

In this economic environment, I have made changes to your portfolios because we have put behind us some of the market decline that I feared. I am taking off some of the hedges aimed to protect you against stock market declines. That means selling some of the conservative bond funds that have held value much better than stocks

Because the market—especially the NASDAQ—may not have bottomed, I am slowly and cautiously taking advantage of opportunities. I’m adding to positions in assets considered riskier, but which are available at relatively inexpensive valuations because they’ve been hit hard. I can’t guarantee that they won’t go down more. However, even after the market hits bottom, we won’t know for sure it was the bottom until many months have passed. By that time, it will be too late to buy investments at the most attractive prices.

I’m buying energy assets, including crude oil, which is very attractive at prices between $20 to $25 a barrel. At these prices, it’s cheaper than milk and water, and oil goes into many products. Oil prices are struggling due to pressures from both demand and supply. The Covid-19 pandemic is depressing demand, while on the supply side, a spat between Saudi Arabia and Russia means the market is flooded with oil. This can’t last forever. Saudi Arabia can’t balance its budget with oil prices at these levels and is reportedly tapping the country’s sovereign wealth fund to cover the shortfall. I feel confident that the news for oil will not get significantly worse. Moreover, oil isn’t going away as an energy source. In September 2019, the U.S. Energy Administration estimated that oil consumption will rise through 2050 (see graph).

Additionally, I’m adding to emerging market stocks and bonds. They’ve struggled because the dollar has rallied as investors flocked to assets considered safer. This will eventually ease. In a fixed income move, I’m adding to municipal bonds, which have been quite expensive until recently.

As always, I thank you for the trust you have placed in me and in 7Summit Advisors. We work hard to earn that trust each day.